The hammer exercise is a bodybuilding classic. Simple, straightforward and effective, just like the hammer itself. So why is the neutral grip dumbbell curl so seldom done in favor of other, more fashionable hand exercises? And, because few people know about its unique features, as well as about the small brachial muscle called brachialis. About the hammer exercise with dumbbells and not only, but also about why and how to pump up the brachialis, and will be discussed in this article.

I propose to start with anatomy, because the name of the exercise hammer for biceps is not entirely correct. In fact, the dumbbell hammer is not so much an exercise for the biceps as for its neighbor, the brachialis. The brachialis (musculus brachialis), or as it is also called, the brachial muscle, is a small but very important muscle that lies just under the biceps.

Its volume is small – only 7% of the total mass of the arm, but above it is the biceps and brachialis, becoming larger in size, “pushes” the biceps muscle upward, giving it a peak. And since it grows in all directions at once, the arm, from an increase in the size of the shoulder muscle, becomes wider when looking at it from the front, while acquiring additional muscularity.

The arsenal of exercises for this muscle is extremely small, and all of them, one way or another, are bending of the arms with a neutral (hammer) or reverse grip, but at the same time they cope with the task of pumping the brachialis perfectly.

Note: The variety of grip is very important for this and other hand exercises. If the palm is directed upwards – the biceps contracts, turned downwards – the brachialis works, the grip is neutral – both muscles work evenly.

Brachialis training does not increase the volume of the arms as much as exercises for the biceps or triceps, but it helps to make the arms really wide, powerful and prominent. The shoulder muscle works passively in ordinary life, but it responds very readily to direct load, so you can quickly pump up the brachialis.

I do not believe that only men can and should do the hammer exercise. Women who train to increase the muscle density of their arms, to improve their shape and relief, may well include exercises for brachialis in their training complex.

Conclusion: pumping the brachialis is not able to greatly increase the volume of the arms, but it can easily add visual thickness and muscularity to them.

What muscles do hammer work on?

Exercise hammer with dumbbells, in its biomechanics, is very similar to lifting dumbbells for biceps, but only when pumping biceps, brachialis acts as an assistant, and in this case, the opposite is true. In the hammer exercise, the following muscles work:

Note: The brachioradialis is a muscle that occupies 60% of the forearm. The larger it is, the more in volume, and they themselves. When doing hammer lifts, we immediately train the brachialis, biceps, and forearms. For this reason, a standing dumbbell hammer can be safely called a complex exercise to increase the entire volume of the arm.

READ  How to build a press with cubes at home

Conclusion: although brachialis mainly works in curling arms with dumbbells with a neutral grip, a large load goes to the biceps and muscles of the forearms.

What does hammer and dumbbell exercise give?

If we put together the benefits of the hammer exercise for the biceps (let’s call it that), we get a rather voluminous picture:

Well, does the neutral grip dumbbell lift deserve to be included in the arm training program? In my opinion, yes.

Conclusion: the benefits of the hammer exercise with dumbbells are enormous, you should definitely use it, and on a regular basis.

The hammer exercise technique is simple and straightforward. It looks like this:

Step 1. Take dumbbells in each hand with a parallel grip. We stand straight, we press our elbows to the body, hands at the seams. We hold the dumbbells below. This is the starting position.

Step 2. Take a breath and straining the muscles of the working arm, raise the projectile until the biceps is fully contracted (just above the 90 ° angle). At the top point of the trajectory, we make a small delay for one or two and on exhalation, slower than raised, we lower the dumbbell in a controlled manner to its original position.

The delay is a prerequisite, it is in this position that the brachialis muscles contract as much as possible. There is no pause – he does not have time to get involved in the work.

Note: it is better to take a dumbbell not in the middle, but closer to the upper edge, so it will be easier to lift it. The weight of the dumbbell (ideally) should be 15-20 percent higher than that used in standing biceps curls.

Conclusion: a hammer with dumbbells while standing is a simple exercise even for a beginner, but without a delay at the top lifting point, the return from it will be low.

How to do hammer exercise correctly?

There is probably not a single exercise in the gym that cannot be done wrong. You can screw up, (or rather, reduce the recoil to zero) in such bends. Doing the hammer exercise correctly is not difficult, you just need to follow 4 rules:

And yet, how many sets of hammers do you need to do? At first, 3-4 sets will be enough, 8-10 repetitions in each. After a couple of months, you can add another 1-2 additional sets, while changing the rep range. In this exercise, the biceps and brachialis work together but respond differently to the same load. The number of repetitions can be changed from workout to workout, on one to do hammer-style bends for 7-8 repetitions, on the next – 12-15.

READ  How to pump up your abs in the gym

Note: The return on the exercise can be increased with a simple technique – instead of raising one hand, lowering and only then raising the other, you can do otherwise. That is, raise your hand and hold it in this position until the second one rises and only then lower it, leaving the other hand in the raised position. This style makes bending the arms with hammer dumbbells heavier, but the load on the arm muscles is exactly doubled.

Conclusion: doing the hammer exercise correctly is not so difficult, the main thing is to watch the elbows, pause at the top and slowly lower the dumbbell down.

Hammer curls with dumbbells or biceps curls, which is better?

To be honest, the questions, which exercise is better, are usually asked to me by newcomers who have come to the gym recently. But more experienced people are no longer tormented by such dilemmas, because there are no good or bad exercises, each has its own pros and cons.

The hammer exercise also has a minus – if you only do it, it will not work to pump up the biceps, since the load is spread over several muscle groups at once. Lifting dumbbells for biceps wins outright here. But if you remember that arms are not only biceps, but also other muscles, everything falls into place.

That is, to gain mass in the arms, you need to do both this exercise and this. Any curls with a barbell or with dumbbells, in which the palm looks up, help to increase the size of the biceps, and training the brachialis, gives the arms width and muscularity. While increasing their power potential.

Conclusion: Hammer-style dumbbell curls, biceps exercises will not replace, but can complement them. Therefore, their place is at the end of the arm training complex, and you need to start it with pumping triceps or biceps.

Brachialis Exercises You Should Try

The hammer on the biceps can be done in different ways: with one hand, with two at once, alternately, standing, sitting on an incline bench or even on a Scott bench. But they are all similar to each other and differ only in the level of isolation of the brachialis muscles. However, there are exercises for brachialis and more original ones:

In terms of execution technique, these are all the same bending of the arms as with dumbbells, but only it is easier to perform them. The projectile is one, located in front of the body, it is impossible to lower it down, fully straightening the arms at the elbows. The muscles are in constant tension, it is easier to concentrate on their contraction.

Therefore, bending the arms with a barbell with parallel arms can be called concentrated brachialis lifts. In terms of its effect on the biceps, such a barbell loses to dumbbells, but it is easier to pump the shoulder muscle with it.

Changing the habitual straight grip to the opposite, turns the barbell curls from a basic exercise for biceps into an equally basic exercise for the brachialis and brachioradialis muscle. True, not everyone succeeds in getting a serious return from its implementation. And it’s not about runtime errors, but about the repetition range.

To lifting the bar with a reverse grip gave a result, it should be done in a power style (7-9) reps per set, no more. And if you add several (3-4) partial repetitions at the end of the approach, the rate of mass gain of the arms will grow even more.

This is an old-old author’s exercise for brachialis off a dusty bodybuilding shelf . It was invented by the circus athlete George Zottman, who traveled to fairs in America at the end of the nineteenth century. Zottman’s signature number was the one-handed push of an 80 kg dumbbell. And the exercise he invented played an important role in the development of the strength of the arms and shoulder girdle.

The essence of the Zottman curls is very simple – from the initial position, the dumbbells rise, as in ordinary curls of the arms to the biceps (palm up), there they unfold with the palm down and fall due to the efforts of the brachialis.

If you remember that it is in this position that the shoulder muscle experiences the greatest stress, Zottman’s flexion can be called, along with lifting the bar with a reverse grip, one of the best ways to pump the shoulder muscle. If the task is to pump up the brachialis and forearms as quickly as possible, you need to do these two exercises.

This is the most isolated way to train brachialis of all. And, of course, it has nothing to do with muscle growth. Rope curls are designed to improve the shape of the arms and are used mainly by experienced athletes during the pre-competition period.

If the amount of fat is minimal, such an exercise will help to pack the existing volume of the arms into the armor of hard, convex and relief muscles.

Conclusion: there are not so many exercises for the brachialis, but if you want and the right approach, you can pump it up pretty quickly.

I hope my story about hammer exercise and how to pump up brachialis will be useful and will help add volume to your arms, making them big, powerful and refined. The kind we all dream of. May the strength be with you. And the mass!

What should everyone know about fitness?

Thu Sep 10 , 2020
Beginners most often cannot give an accurate definition of fitness, and they are all the more unfamiliar with its features and varieties. After reading the article, you will have basic knowledge.  Then you will be able to clarify for yourself what fitness is and what problems it helps to solve, learn […] 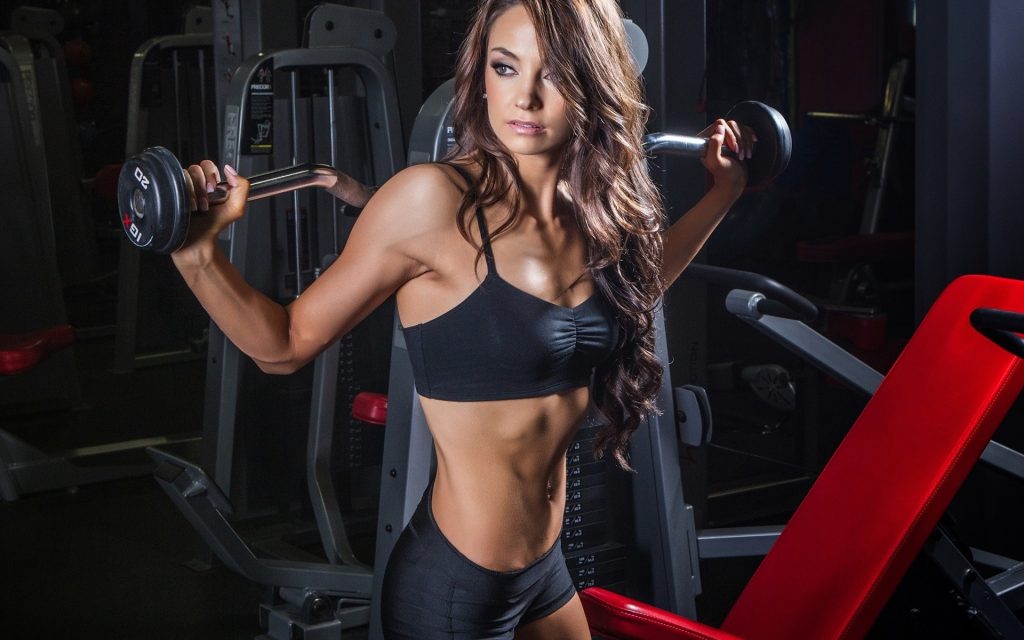