Jogging or slow running is also known as a seemingly unpresentable “shuffle run”. In this style, Soviet people tried to escape from a heart attack, excess weight and problems. In the United States, since the 70s of the last century, running has either become fashionable or has been declared almost the cause of all the troubles of the American nation. The problem is that many people really believed that running was the only remedy for a heart attack and by doing only this, can you can avoid excess weight. Therefore, the reputation of this type of activity was significantly damaged by those who like to train and not keep the regime. Running is very demanding for recovery, only with this can your really improve your health and train the body. As for weight loss, jogging can be used as a cardio exercise, a way to increase calorie burn, but there is no point in trying to “run over” a bad diet.

What speed can you call “jogging”? There are no specific data that would allow us to define this run just like that. We don’t know the speed, so what kind of running is considered relaxed? Obviously depends on the runner’s fitness. It is sometimes said that the distance “covered” by jogging can be walked quite calmly on foot, at the same pace.

The difference from walking is that there is still a flight phase in running, that is, the moment when both feet are off the ground and do not touch it. This kind of load can be well imagined if you run at about a speed of 6-7 minutes per 1 km, for most beginner runners.

Jogging is synonymous with fast walking, sometimes also called slow jogging. In fact, speed is subjective. In more modern sources on running, it is believed that jogging is running at the lower border of the aerobic zone, not yet speedy, but no longer just brisk walking.

Jogging requires the skill of setting the foot, and keeping the body in a straight, somewhat relaxed, but neutral position:

See also  Frog Crunches Exercise: Benefits & How To Do Guide

Muscles that work when jogging:

You will not be able to “pump up” muscles with jogging, you will only tighten them, strengthen them, improve their tone, but you will not get huge calves, big hips and buttocks from jogging.

Does the heart muscle get stronger while running? The latest research shows that running helps to get rid of health problems, but it does not lead to “pumping” of the heart muscle and the thickening of its walls.

Jogging is a useful activity where you can:

Running is said to be cheap, attractive, and healthy. Arthur Lydiard introduced this into the everyday life of the Americans, he was the first to write a book on how to run properly for the layman, and created the first running clubs. But the main popularizer was Jim Fixx. The problem with Jim, was that he liked to drink, was overweight and smoked long before he started jogging. When Jim died at the age of 52 from a disease associated with a malfunction of the heart, ordinary people and doctors took up arms to start running.

At this time, Kenneth Cooper’s aerobics won hearts and minds, it was simpler from the point of view of the social component, it was practiced in groups and the former running fans loved it. But jogging again won a place in the hearts of ordinary citizens when it was discovered that the work of consciousness improves if you run about 5 km every day. Nowadays, jogging is quite a fashionable hobby among businessmen, IT professionals, and other successful people. The reason is precisely in the improvement of cognitive function.

Arthur Lydiard himself lived a long life and did not leave training until old age. The Soviet popularizer of running, academician Nikolai Amosov, was also a long-liver. Well, about poor Jim, everyone says that he caught himself a little to late.

Jogging and Its Effect on the Psyche

Many have heard of the “runner’s high”, a special state of euphoria that comes during a run. Many people run because of it, not because of the health benefits and not for the sake of strengthening the muscles. A runner’s high is a scientifically proven fact, it is the nervous system’s response to a surge of endorphins released from the exercise.

See also  Plate Raises for Shoulders: How To Do & Muscles Worked

It has been proven that systematically people who run do not experience headaches, do not suffer from minor muscle pains, and do not experience problems with seasonal depression, which, as it were, “covers” people when the lack of sunlight becomes apparent.

Many scientists associate a runner’s high not only with an increase in the production of endorphins, but also with the fact that being in the fresh air, a person unwittingly “heals” his endocrine system. He runs and gets great emotions, but vitamin D is produced under the sun’s rays. It is he who helps to improve the functioning of the hormonal system, helps to normalize the mood and allows you to get rid of prolonged depression.

By the way, it is with this that they also associate the fact that running can help patients with depressive and sub-depressive states to cope with their problems.

How to Jog Properly?

An enjoyable run will be made by choosing the right place:

Getting the most out of your runs will help if you follow these guidelines:

Running clothes are selected according to the season. In winter, this is thermal underwear, winter running tights, fleece jacket, and a weather-appropriate top layer. In temperatures up to minus 10, you should run in ordinary softshell jackets, some people prefer to wear a puffer jacket when the temperature is lower. It is important to cover your ankles when wearing warm leggings, and be sure to wear a hat, gloves, and a scarf around your neck.

In autumn, the uniform is lightened, at positive temperatures many run without thermal underwear, paying attention to shoes (they should not get wet, wet feet are not felt during running, but this is precisely the reason for colds) and a raincoat, if necessary.

The warmer the spring and summer, the less clothing you wear. Some runners are comfortable with cropped tights, others are comfortable with shorts, it depends on the structure of the thigh muscles, not style. Women must wear sportswear to protect their breasts from stretching and chafing, otherwise there are no requirements for underwear.

The golden rule of an amateur runner is to spend one time in a set of normal running clothes than to cure a cold, then get scuffs and calluses all season, or fight with wet jackets and sneakers.

Running shoes should be changed regularly. Most manufacturers recommend doing this after a couple of active running seasons.

Lessons are not recommended if:

In the latter case, the training should be postponed. In all others, a doctor’s consultation is required. There is no consensus regarding pregnant women. Western obstetricians-gynecologists allow their patients to jog, if there are no conditions that threaten health. Domestic people are advised to switch to walking.

Serious jogging requires adequate nutrition. That is, a person must initially make a choice, if you run for weight loss, you should forget about speed, limit yourself to jogging several times a week and short distances. If the goal is to increase your speed and run long distances, following a calorie deficit diet is not rational. Then they feed on demand, providing a sufficient level of energy with the help of carbohydrates. Run regularly to benefit from this activity.

How to Get Abs at Home: Nutrition Plan, Workout & Exercises

Thu Sep 10 , 2020
It would seem that abdominal exercises are included in any fitness program. Crunches, leg raises, and planks are available to everyone. But not every visitor to a fitness club and not even every trainer, has an abs with 6 pack. Why is this happening and are there any secret movements that will allow […] 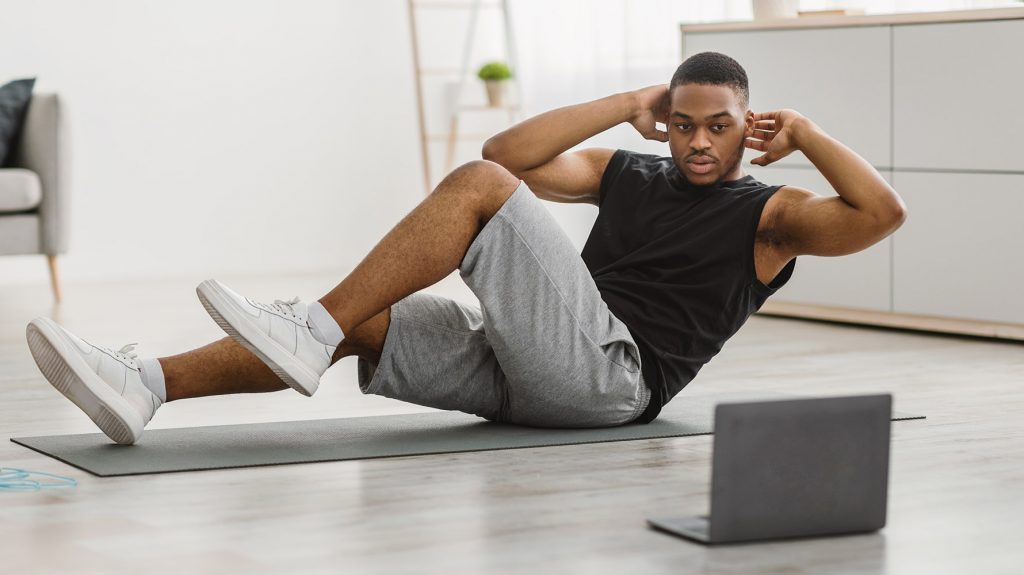